I made my first platinum/palladium print in 1989, so I've been doing this for long time. In that time, I don't think there's ever been such a flurry of new and improved papers happening at once like there is now. As those who work with the historic/alternative/handmade processes know, a good print requires a good paper and we are forever on the search. Each process has its requirements for what constitutes a "good" paper, and the requirements for platinum/palladium printing are among the strictest. Well, suddenly it is raining new, revived from the dead and revised papers for my beloved processes from Hahnemühle, Legion Paper and Arches.
Hahnemühle

Over the past nine months I (and several other printmakers including Christina Anderson, Keith Taylor and Mark Nelson) have been testing a brand new paper for platinum printing made by Hahnemühle called Hahnemühle Platinum Rag. 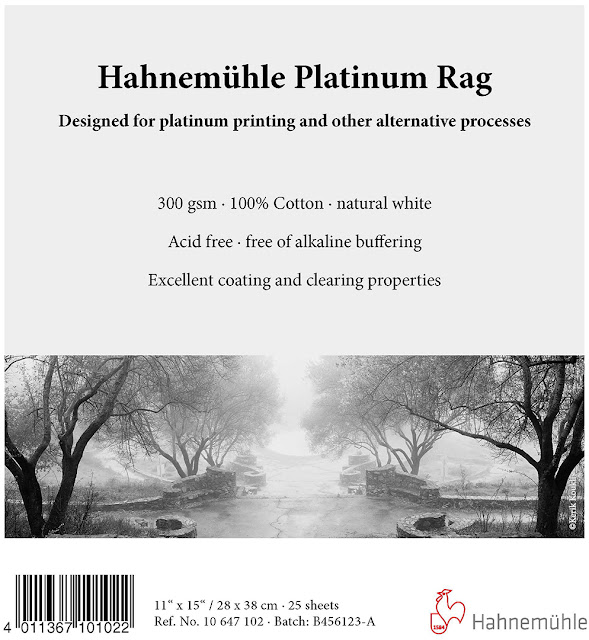 Hmm... That image on the label looks familiar. I understand the paper will be available for retail purchase in mid-March 2016. To cut to the chase, this is a great paper for platinum/palladium and the combined gum bichromate over platinum/palladium processes that I use. I understand it as also very cyanotype friendly. It is internally sized with no animal byproducts (although the sizing itself is proprietary), 300 gsm, non-mould made, 100% cotton, natural bright white with a nice subtle texture. My guess is that it will work well with most of the common "alternative processes".  It holds up very well to repeated wet cycles and makes a beautiful, rich print. Pre-shrinking is required for multi-print processes, but this is true with most papers. I found that it coated and printed even better following the pre-shrinking process. It can be printed on either side, the back having a very fine wire-side texture. I don't currently have a functioning reflection densitometer, but I will say the DMAX is very good. It resolved 14 or 15 steps on the 21-step Stauffer step wedge. The prints were made using palladium and a very small amount of Na2 contrast agent. It prints a little bit faster than Arches Platine by roughly 1/4 to 1/3 of a stop. This will be among the most expensive papers for the process (excluding Japanese tissues), but it is also among the very best. Here are a couple of scans of some of the test prints I made for Hahnemühle. JPG scans of analog prints are an exercise in futility, but they will give you an idea.
Legion Paper

In other very good news, Legion Paper is bringing back one of my all-time favorites, Revere Platinum. Although it used to be somewhat inconsistent, the currently-retired Revere Platinum was one of the best papers I ever used when it was good. Magnani, the 600-year-old Italian paper mill that made the paper went out of business a couple years ago. I don't know who the new manufacturer is, but the few samples I've tried have printed extremely well. It's a little heavier at 320 gsm and has a pleasant off-white color without being too yellow. I've made both straight platinum/palladium and gum over platinum/palladium prints with this paper that are just beautiful. This paper also required pre-shrinking for multiple layer printing. In fact, double-shrink may be necessary. I am still testing... I believe this paper will also be available in the next 4 to 6 weeks from Bostick & Sullivan, NY Central Art Supply, Talas and others. My understanding is that the price of this paper will be roughly 30% less than Arches Platine. Michael Ginsberg from Legion Paper has pursued this tirelessly and my hat is off to him for making it happen. The man is passionate about paper and he's been in the business a long time. Here are a couple of sample prints on the new Revere Platinum.

In September of 2015 Arches announced it had re-formulated the venerable Arches Platine. Platine was one of the first modern papers designed from the ground up for platinum/palladium printing. It has a very close cousin in Bergger COT 320, a more expensive, but very similar paper.  It now comes in two weights (310 gsm as before and a thinner 145 gsm version). I wouldn't use the thinner version unless the prints were going into a handmade book or something like that. It's a little less white than Hahnemuhle and a little more white than Revere. The few samples I've tested of these papers have coated, printed and cleared very well and the prints look great. I saw no evidence of bleeding that sometimes happen with this paper. If you are pining for COT 320 which often seems to be in short supply, forget it. This is Platine at its best. I believe this paper is available now from Bostick & Sullivan.

There you have it. It's a good time to be making hand-made prints. These papers are all excellent. They produce nice rich blacks, smooth tones and are easy to work with. I've had the most experience with the Hahnemühle Platinum Rag from which I have made many prints now. Next would be the Revere Platinum of which I've had a handful of sample sheets to work with. I've only tested a couple sheets of each of the two versions of Arches Platine. They each have a different character, so there is room for all three of them in my darkroom. Now, we'll have to wait and see how these papers perform in the long run. Which one will prove to be the most consistent from batch to batch over time? In the end, that will determine the winner.